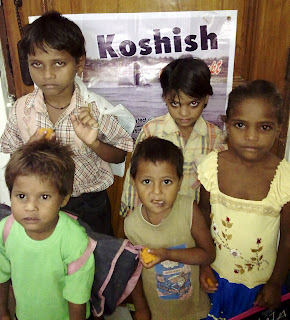 Classes of children are continuously running at ours. This week, a new batch of five more children namely Mangal (10 Years), Kiran (8 Year girl), Jatin (5 Years), Bina (7 Year girl) and Priya (9 year girl) has started at Ek Koshish.  All children are very happy and pay attention on whatever is taught to them.  Mangal and Bina seem to be very brilliant students and within a period of 4-5 days, they have learnt counting from 0-9 and some of the alphabets.  They did not have any school background nor have their parents any education. They belong to the poorest strata of human society.  Priya is also intelligent girl having a little school background. She has a great potential to learn.
Seeing these children, one may realise that God does not craft any discrimination while sending souls on earth. It is the society where shackles of rich and poor exist due to human greed and selfish ends, and opportunities are availed by human beings only on this pattern of society based on richness and selfishness. We pray God that we may go ahead in our attempts to educate these underprivileged children. We will be rewarded enough if every one of capable ones could do Ek Koshish (one attempt) to provide them education in their becoming good citizens and a future voice of our country as well as the whole world.
We also express our sincere thanks to the people contributing with their time and funds in our attempts to take this noble venture ahead.
Ek Koshish One Attempt 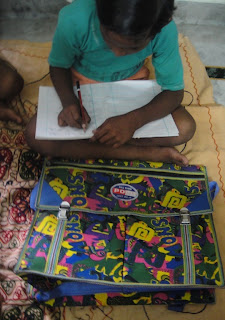 Today, we were very surprised to see that our students brought a friend with them to our daily classes for illiterate children living in poverty: His name is Karan (depicted above), and he goes to an Indian government-run school in the neighborhood. Karan came knowing the alphabet and the Hindi “prathmik gyan” (how we say “alphabet” in Hindi), but he still struggles with both sets of characters. Though he can read each of the characters properly in either language, he has a difficult time remembering the correct order of the symbols and cannot recall the letters from memory. Karan’s arrival marks a milestone for our NGO, as our classes have been offering the children a safe environment, where they are motivated to come, learn, and work hard to achieve their goals. We are very proud that our students are enlightening their friends to join our classes to enrich their lives with precious knowledge.
On another note, our volunteer from the US, Justin ji, has been spending extensive time with each child, especially Arun, to ensure that they properly learn the material they have been taught in their school. Arun, Priya, and Karan all attend government schools, but they lack discipline and sometimes learn material incorrectly when they practice and memorize their coursework at home. It was troublesome for Arun to forget his mistakes and relearn the English alphabet (as he had forgotten the letters “E” and “F,” moving from “D” to “G,” among other mishaps), but Justin ji’s arduous rehearsals of the alphabet finally made an impression on Arun’s mind, as he has relearned the alphabet correctly. We hope we can meet more volunteers who can help us with our mission to illuminate these children out of ignorance. Stay posted on our blog, as we have a variety of new ideas to share in the coming posts! 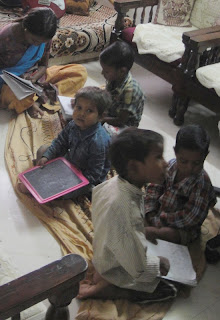 I am writing today because I witnessed a very inspiring sight yesterday when I was invited for lunch at a neighbor’s home. The neighbor has adult children, and runs a home filled with his children and grandchildren, with the help of one maid. Though the work appeared to be very demanding, once everyone was out of the house, and I was there sipping some chai, I overheard, from across the room, somebody was reciting the English alphabet, in a very heavy accent. When I looked over, I noticed the maid herself was reading from a notebook aloud! It was quite surprising to see that this young maid, who doesn’t attend any school, took the initiative to start to learn English on her own, as she practiced reading the alphabet correctly from memory. Even more surprising to me was that the family that invited me for lunch doesn’t speak any English really at all: They simply enjoy my company! The maid had no access to any English newspaper, as the family only receives a copy of the news in Hindi each day, and yet the family still took the time to offer their maid English lessons. I am still surprised with what I witnessed, but it is very heartening to see that many average, middle-class people in India do want to help out their illiterate brothers and sisters in India. We should not take our own education for granted, as I never realized how precious being able to read a sign or write a message really is until I started working with Ek Koshish.

As we have been keeping up with our classes, I am posting a picture from our last lesson with the children, when we practiced dictation with the advanced class, and continued with basic numbers and letters with our beginners. 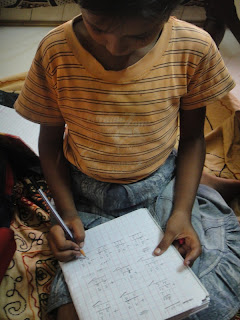 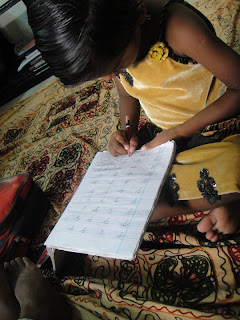 Last night, we held the second class with our newest students at Ek Koshish. The children came eagerly to class, excited to learn new material, as they had been out of school all summer up until now. With Arun, we got to work on learning all of his capital letters in cursive, as he had advanced up to this level. He was having trouble with capital G, but we taught him the correct way. Interestingly enough, the cursive script we use in India is quite different from the cursive script we are taught in the US, especially when it comes to capital letters: so, I too learned how to write the cursive letters in English when in India! Arun has mastered the first half of the alphabet in cursive, and he knows all of the letters in printed form as well. Poonam, the youngest of the children, is surprisingly advanced, compared to her older brother and sister, as she knows the whole alphabet, and knew how to add and subtract small numbers. Priya was very good in her addition and subtraction practice with us, so we gave her some more advanced practice with adding and subtracting: Soon we can teach her how to carry over numbers when adding. When I spent time with Nancy, she showed great progress with her counting numbers, on her own, up to twenty, and recognizing their corresponding symbols by heart. Badal, up until yesterday, could not draw any number besides “1,” but yesterday the director from Ek Koshish sat with him and helped him to be able to write the number “2” on his own! He drew the number several times for practice, and we hope that he can move on to more numbers in the coming lessons. Finally, Vicky is still having a hard time recognizing that letters aren’t numbers, but he has been practicing writing the capital letters “A” and “B” quite well, and can write the numbers “1-4” like a natural now. I am very proud of our bright young students, who are desperate to escape from the life of poverty they currently lead. 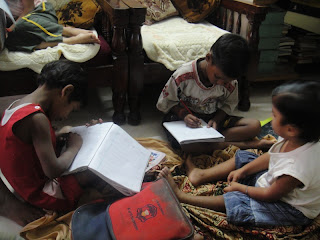 Yesterday, Ek Koshish hosted a new class of children who come from slum areas of Delhi NCR in Faridabad: Four children, Arun (about 7 years old), Priya (about 9 years old), Monika (about 5 years old), and Poonam (about 2-3 years old), attended their first class with us. In the picture, see Poonam, Priya, and Arun as they diligently took out their English notebooks and got to work at the beginning of class. Poonam is too young to join our classes, but the rest of the children have already learned quite a bit. They have been going to a government school in the neighborhood; however, they have not shown much progress with their work. They have learned the English alphabet, counting up to one hundred in English, and some of the “Prathmik gyan” (the Hindi words meaning “alphabet”), but they have not accelerated beyond this point in their studies. They live not too far away from the Ek Koshish office, so we have welcomed them into our study group. Because it was our first day with the children, we learned about what the children have already learned, their weaknesses, and where they left off in their studies since summer vacation started. We look forward to working with our new students, who are more used to the routine of a structured classroom, and we hope that they too will help their fellow students, who are struggling, but determinedly proceeding, with the English alphabet!