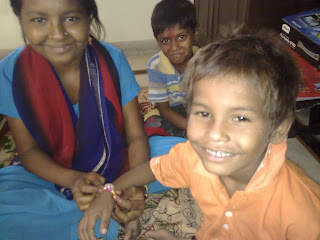 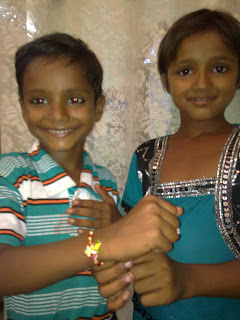 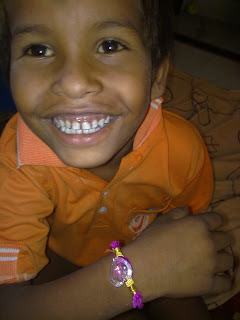 Raksha Bandhan (Raksha means protection and Bandhan means bond) is the name of a festival which is celebrated across the country irrespective of color, caste and creed.  It is the festival of bond of love between brothers and sisters. Today it is celebrated throughout the country with traditional fervour and enthusiasm. On this occasion, sisters tie Rakhi (Rakhi means a thread duely decorated) or sacred thread (a simple red or yellow thread) on the wrists of their brothers and pray for their well-being. Brothers, in turn, vow to protect their sisters amidst all circumstances.
For them who cannot understand this festival, it is just like tying of friendship band on friendship day. But the difference is that Raksha Bandhan is celebrated between brothers and sisters. However in India, devotees too surrender themselves before God offering Rakhis seeking protection and blessings of God. This is a unique festival by all means which causes immense love between a brother and sister. It is being celebrated since the time immemorial in Indian Culture. History is evident that whenever sisters have been in trouble, brothers have protected them from all problems with all their pelf and power.
Like all Indian festivals, the festival of Rakhi has numerous tales associated with it.  It is always interesting to know the tradition and mythology behind every festival and with the help of them the importance and spirit of any festival can be understood. The most important story about Raksha Bandhan from Indian religion and mythology is about Lord Krishana and Draupadi.
Once Lord Krishna got His hand injured while doing some work. Rukmani, His wife, immediately sent her servant to get a bandage cloth for the wound.  Sathyabama, His second wife rushed to bring some cloth herself.
Draupadi, whom Lord Krishna always took as Her Sister, was watching this incident and without waiting any more, she simply tore off a part of her sari (Indian dress of woman) and bandaged His hand.
In return for this deed, Krishna promised to protect her from all troubles in time of her distress.
On this incident Lord Krishna uttered the words ‘Akshyam’ which means: ‘May it be unending’.  And we see that after this incident, this tradition of tying up sacred thread on the hand of brother is continuing in Indian Culture.
In Mahabharata (the Greatest War between Kauravas and Pandavas) , we find that when Draupadi was insulted in the court of King Dhritrashtra, father of Kauravs (symbol of evils) and when Duryodhan, son of the King, tried to disrobe her in the open court, that was how Draupadi’s sari became endless and Lord Krishna, her brother, saved her from insult and embarrassment.
In the medieval history of India, there is one more important and interesting tale of this bond of love between brothers and sisters.  This is the true incident which happened between Queen Karnawati and Mughal Emperor Humayun which is popularly known in India even today.
Widow queen Karnawati was ruling over Mewar region of India (Rajasthan) as a care taker empress after the death of her husband, King Rana Sanga. She was ruling in the name of her elder son, Vikramjeet Singh.
When Bahadur Shah of Gujarat region attacked Mewar for the second time, the queen, begged her nobles for support in that time of crisis but  they betrayed the queen.
Knowing this betrayal, queen Karnawati  wrote to Humayun, the then Mughal Emperor of Delhi for help. She also sent him a Rakhi and sought protection.
It is very interesting to know that Humayun’s father Babur had already defeated King Rana Sanga in a fierce battle in 1527. As such there was an enmity between both states.
When the Rakhi sent by the queen reached Humayun, he was in the middle of another military campaign. He took that call for help immediately abandoning that military campaign,  he rushed to Mewar for help of queen Karnawati.
But unfortunately, he could not make it on time as the queen‚Äôs army was defeated in Chittor and queen Karnawati committed Jauhar (an act of self-immolation to protect herself from indignity of falling in the hands of enemy)
Bahadur Shah however could not go any further and had to turn away from Chittor as Humayun‚Äôs military reinforcements arrived by then to give fight to Bahadur Shah. Bahadur Shah was defeated. Humayun then restored the kingdom to Karnawati’s son, Vikramjit. As such Humayun kept his word to protect the sister who sent him a Rakhi.

As such this is a wonderful festival of brothers and sisters. This festival also plays an important role in the society. This festival strengthens fraternal feelings and the spirit of kindness and goodwill in the society. This festival promotes harmonious social life by reaffirming the faith of citizens in the traditional values of love and protection fostering community bonding irrespective of caste, creed and color and highlights the importance of women in Indian society not only as a mother but also as a sister.

Ek Koshish One Attempt too celebrated this festival of Rakhsha Bandhan with its little brothers and sisters. All little sisters tied Rakhis on the small wrists of their little brothers and entire team of Ek Koshish, put tikas (putting red color and rice on foredhead)  on their foreheads, distributed sweets and some money was given by the brothers to their sisters as a token of love and affection towards their sisters. We hope that we shall succeed in our vow to protect these younger brothers and sisters from all distresses of their life through better education and training.
EK KOSHISH, One Attempt This week, I went with the chairperson of Ek Koshish to learn about the leprosy colony in Faridabad, before we visited an all-girls’ orphanage in Sector 15 of Faridabad, by the name of “Arya Kanya Sadan” (Hindi for “Communal home for girls [founded by the Aryas]”). At the leprosy colony, they explained to me how their charity initiated: In 1990, the government donated land in Faridabad to the people (and to family members of people) afflicted with leprosy. Foreigners and other rich benefactors, who supported the cause here in India, built the structures on the government-donated land. One of the structures, the hand loom shop, was donated by the German Relief Fund for Leprosy, along with dozens of machines used to make different types of fabric. The person running the shop explained that his parents were leprosy patients too, but they had passed away. Most of the workers are patients suffering from leprosy, but some of them have a relative who suffers from the disease. Nowadays, thanks to several health camps and intervention from the government, the number of families affected by the disease has dwindled only to 105 families. Afterwards, we visited a cow shed, operated by the people living in the leprosy colony, who sell the milk they produce from the cow shed to earn for the residents and for the organization as a whole. Heading out of the cow shed area, we found some of the leaders in the community, whom we asked if I could begin teaching some classes to the children after school. They were happy to accept my services, and we may be organizing the classes in the near future! Otherwise, they also suggested that we visit the orphanage in Sector 15 of Faridabad, “Arya Kanya Sadan.” There, the warden was happy to see my interest in teaching her students, of which there are ninety one, and I would focus my coursework on English grammar and conversational English classes. Now we are in the process of seeking permission to organize my classes in the orphanage as well. It may be difficult for me to get permission to teach at the orphanage, because it is an all-girls’ orphanage. Even if I am unable to get the opportunity to teach at Arya Kanya Sadan, I am looking forward to all of the work and different ways through which I can reach out to this community and help the truly neediest of people! 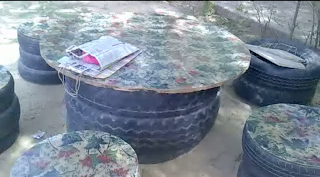 This morning, I went with the administrators of Ek Koshish to a small town in the village of Khedi, in Faridabad, where they support a self-sustainable orphanage. The orphanage has been running for over a decade, but since then they have been making a means for themselves by hiring women in the neighborhood to sew, stitch, and make all different arts and crafts made from 100% recycled materials: Once they sell their products, they can pay the women who fashioned these handbags, purses, wallets, and more, and also sustain the orphanage itself. They grow their own fruits and vegetables on the premises, and it is very safe inside for the 53 children living in the home. When I saw their goods for sale, I decided to purchase some of them, as they were very attractive, and I loved the idea of this self-sustaining orphanage. Finally, before reaching the orphanage, the directors of Ek Koshish and I thought it would be a good idea to bring some “Laddoos” (a famous Indian confection, a little smaller than an egg) for the children, which they all savored with joy. It was a real treat to see them smiling and enjoying our small treat for them. Here is an example of their unique approach to recycling goods, as we comfortably took a seat on these old tires, while we peacefully sipped chai with the orphanage coordinators. It was a very enjoyable day!