Summer vacations are going to expire very soon. All children are busy in completing their home works before the schools open. Of course, they are not as lucky as other children of the rich people who spend their summer holidays at mountainous terrains. Prior to this year, I used to visit the mountains in every summer vacations and have seen the beauty of Greater Himalayas and have had so many unique experiences which sometimes are still haunting me – What is Nature, Who created it, How is it healing, what can it have its impact on one’s inner and outer life, whether god and nature are the same and if so, who created god? All these questions coupled with strange and unique experiences are unsolved and are still unanswered in spite thousand and thousand years after human creation.
All of a sudden, when I was taking a class of the children for the purpose of getting their homework completed, I asked one question from one student, named Ravi- what is nature? There was a pin drop silence and every child was looking at one another’s face. Ravi who was a student in 6th standard was looking down at earth with his face and eyes blank as if he knew nothing. After a few seconds, I took the lead and just to ease out the atmosphere, I asked another question- what are trees, mountains, clouds, wind, rain, stars, sun, moon, etc.  Still, there was silence. Though I had asked a very basic question these children were unable to answer. The question was why? It appeared to me that they were so ignorant that they could not resemble themselves with nature. Then to break the silence, I told them these are Nature. Nature is like our mother, that cures our miseries and paves the way for our growth. I was just talking about the goodness and motherly traits of nature, in the meantime, Rakhi, a girl child, spoke extempore
“Agar Prakriti hamari mata hai, toh bhookamp kyon atta hai aur hamare ghar gir jate hain aur bahut log maare jatein hain”
(If nature is our mother, why earthquake comes and pulls down our houses and many people are killed).
I was shocked to hear such a response from such a small child. I called her near to me and asked very politely as to why she thought so. Her mother had told her that an earthquake had come recently in the region of Nepal and its surrounding parts of India and many of her relatives were killed. I had no answer except hugging that girl. In front of my eyes, I had my good memories which I had lived with nature during my several trips and on the other hand what the girl child had spoken with such anger against nature.
Children are always true as they do not adopt dual standard while putting forth whatever is in their inside. It is true, Nature may be furious but the question is why? I am still haunting to find the answer and reply to that child!
Anubhuti Jain
Ek Koshish one attempt 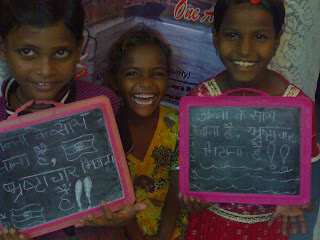 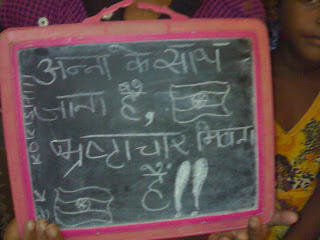 Anna Hazare’s anti corruption movement is in full swing in India to make India corruption free. Anna has boldly declared that it is an other freedom struggle but now it is against corrupt people of our own society to make the common people free from their shackles.
Corruption is immaterial for the rich and ruling class as they can afford any thing whether inflation or anything else. But what about the lower and middle class of people that form more than 90% of Indian population. It is this class of people which is badly hit by corruption. Each and every government department from top to bottom is found to be corrupt practically realised by each and every citizen of India. The common man is put to lot of hardships and it has become difficult to make both ends meet as prices of essential commodities are rising constantly due to corruption. Anna believes that our freedom which we got at the cost of sacrifices of lacs of people of this country is at stake due to corruption and unless it is uprooted, the country will not be free in its true sense. Therefore, a peaceful war has been started against corruption with the help of immense support from people.
But the question arises why this movement is being opposed by the ruling party and their supporters? The ruling class boldly declares that Anna Hazare’s anti corruption  movement is unconstitutional and un-parliamentary which cannot be accepted in a democratic set up like India. But why this ruling party forgets that the very first word of the Preamble of our Constitution i.e. “We, the people of India…” makes is abundantly clear that Constitution is not separate from the people who have sworn it. Parliament is nothing but a house of representatives of the people. Then how can this movement of people throughout the country be blemished as un-parliamentary or unconstitutional?
It is very strange in the Indian democracy that the ruling party is ruling over the country having only 15-20% votes in their favour and opposing this mass movement of people in India. If a person thinks rationally it is evident in India that 90% people (may be 95%) belong to lower and middle class and these people are badly hit by corruption. Rich and ruling class can afford corruption in any situation. Rather this rich and ruling class prospers only due to these bacteria of corruption. Who does not know the names of various big corrupt poliotician, ministers, officers etc who are under trial but nothing is happening. It is a common phenomenon in India that some people adopt corrupt practices and amass uncountable wealth. In turn wealth brings them power. And with this power and wealth, these corrupt people govern over the country keeping the lower and middle class at back foot.
Jan Lok Pal Act is nothing but a sort of deterrent over the people who are in the government in any position i.e. politicians, ministers, officers, judges etc. If a person performs his duty in duty bound manner, there should not be any fear of any deterrent. Tough Opposition by the ruling party against this anti corruption movement is indicative of malafide intentions of the corrupt people in the government.  Why not deterrents should be there in the democracy? How many examples can one quote regarding punishment of corrupt people who have been awarded severe punishment by Indian Courts? How many examples one can quote about confiscation of this immense wealth of a single corrupt person? Name any politician who have made efforts or raised voice against the thousand lacs crores rupees black money in swiss banks? Whose money is this? How many people know about it? From where was this black money earned by these corrupt people? They have sucked the blood of this poor and middle class of India and when someone like Baba Ram Dev raised the voice, how the innocent public was thrashed by police in the name of law and order in the midnight. Just think who were the people who ordered the police to fire tear gas shells and lathi charge over the sleeping people taking part in the movement? Is this Indian democracy which provides everyone fundamental rights enunciated in the constitution?
Just think, if the people like Anna Hazare have started to view a better tomorrow for common man with no corruption in India, What is wrong? What was Gandhi Ji doing for our independence? What was his motive? Isn’t Anna has the same motive, of course this is a fight against corruption which has become rampant in all spheres of our society.
Really in Anna Hazare, people of India see emergence of another Gandhi to fight against the virus of corruption. Anna Hazare’s movement is purely based on non violence like Gandhi Ji’s movements for our freedom struggle.
Let us make ek koshish, one attempt to make this movement a success for our bright future and prosperous India. Look at the pictures above, if they are happy to see this movement at its baby stage, just think about their happiness and development when we will have our country corruption free…… again a golden bird…….
BHARAT MATA KI JAI …………………………………………….JAI HIND
Ek Koshish one attempt